NOTE: This was written prior to the release of Mastodon 4.0, some information may be outdated.

The first 7 months and the last 72 hours

Since April of this year I’ve been running my own Mastodon server and 3 days ago we hit 100 users which was a huge milestone for my tiny little server… and then all of a sudden something happened, the other Mastodon servers started to get full and new users were looking for homes. Less than 72 hours after being excited for hitting 100 users we hit 10,000 users.

Awesome right? The more users the better when it comes to social media! But the server was not ready for that kind of load, 2-3 new users every few seconds plus all of the new users all active at once was putting some strain on the server, and to make things worse my e-mail provider had our account capped at 7200 e-mails per day which was more than I ever expected to need. For the first 48 hours I kept having to open and close signups to let the server catch-up even after upgrading the server hardware, it was pretty insane.

My server was just falling over from all of the Sidekiq jobs queueing up after 2500 new users and I needed to optimize the server better to handle them or we would have been stuck at 2500 forever. If you’re a Mastodon server, the Sidekiq dashboard is super important and basically tells you when your server is about to throw in the towel. Prior to October 27th Sidekiq was handling less than 10,000 jobs per day, October 27th to November 3th it was averaging just under 100,000 jobs per day (this was due to heavier usage on the Fediverse as a whole), Novermber 4th to the 6th it rose to 300,000 jobs per day, then on November 7th we hit 3,048,305 jobs for that day. November 8th we did just under 3,000,000 jobs because we had to disable new signups every few hours and disable them overnight to ensure stability. We turned signups back on November 9th and hit 3,492,541 jobs for the day. Looking at all the data together it looks like the numbers for those busy days can be attributed to A LOT of retries because the server could not keep up to the demand at all, the number of jobs for today after doing all of the tweaks is much more reasonable even after doubling our user count today.

The rest of this post will mostly be about the technical side of things, I will do other posts later about non-technical stuff, but I felt this was the most important information I can share now for anybody who is running or wants to run their own Mastodon server.

I’ve been a server admin since college (many, many moons ago) so managing a server isn’t new to me, but PostgreSQL, Puma, and Ruby/Sidekiq are all fairly new to me so this whole situation forced me to do research for all 3 to figure out what I could do better instead of just throwing hardware resources at the problem. There are some good tuning guides for Mastodon out there, but they were a little too basic to be helpful for me. They did point me in the right direction though and I was able to read more guides (especially a Mastodon blog post from 2017 that was very helpful).

I’m going to make this simple so you don’t have to do all of the research I did (although it’s still recommended because I might actually be lucky and not right), these are the top things you need to do to optimize your Mastodon server:

Break out your Sidekiq services

This is the absolute easiest thing you can do to get the best performance benefits thanks to Stux over at mstdn.social for putting the files on GitHub basically ready to go for you here: https://github.com/mstdn/Mastodon/tree/main/dist

The process to set this up is super simple:

And that’s it, you’ve just increased your performance substantially in 5 steps!

Now this tweak is also super simple and could potentially offer a nice performance boost based on your server’s configuration and how you set these fields (this is the part where I’m not 100% sure about and copied the settings from the 2017 blog post).

I recommend you go read the blog post here to better understand the specifics. The tldr; is basically WEB_CONCURRENCY = RAM and MAX_THREADS = CPU.

This was the hardest tweak for me because none of the tutorials I found worked for me, I had to figure this out on my own after watching way more tutorials than I had planned on for apps that weren’t Mastodon. The good news is I figured it out so you don’t have to.

Ultimately this guide at Masto.host was the best one out there and it’s 100% correct aside from 2 things it’s missing so instead of re-writing the guide I’m just going to explain the two issues I had with it so you can follow the guide and then fix those two things:

In the even that guide and this info still doesn’t work for you please reach out to me and I’ll do either a video tutorial or a step-by-step write up with screenshots because I do remember it was a tough process for somebody unfamiliar with PostgreSQL.

I’d like to end this post with some other random observations I’ve made these past few days:

Wanna take a guess what day we got listed?

The server is a CPX31 plan from Hetzner.Cloud* which is only about $16.25 per month for the server which includes the server and automatic daily backups.

I am using Backblaze B2 for the Mastodon file storage for 3 reasons:1. Cost - Backblase B2 is the cheapest object storage out there at around $5 per TB and I only pay for what I use.2. Scalable - I can use as much or as little storage as I need and I can easily move the storage to another server if I want without having to copy all of the files over (currently over 600,000 files totaling over 136GB).3. DIY CDN - Backblaze has a deal with Cloudflare which includes unlimited and free bandwidth if you put Cloudflare in front of the object storage. Here’s a great guide to building your own CDN: https://www.backblaze.com/blog/free-image-hosting-with-cloudflare-transform-rules-and-backblaze-b2/

As previously mentioned, I’m also using Cloudflare for my DNS/CDN. I’m currently using the free plan which has been great and thanks to the caching I’ve saved quite a bit on bandwidth (which also means better performance for the users). I’ve gone from using about 100MB of bandwidth per day to 217GB per day with most of it being cached so according to Hetzner, my server has only used about 100GB of bandwidth for the past 10 days which is impressive.

Go out and do good things! 👍-KuJoe 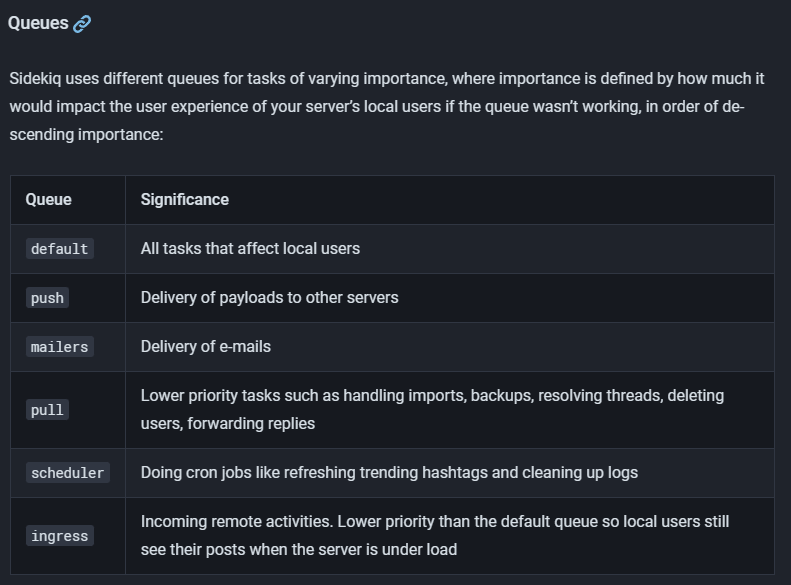 What is "Sidekiq" and why is it important? Sidekiq is the application that processes all of the "jobs" on a Mastodon server. These "jobs" are every action your server performs including sending e-mail, creating posts, pulling posts for users to view, uploading media, updating profiles, setting filters, cleaning up the database, and so many more actions. Basically, if something happens on your server or on a server your server knows about, there's most likely a Sidekiq job for it. This means that Sidekiq is one of the most crucial parts of the Mastodon server and it needs to be able to process as many jobs as it can as fast as possible to ensure your server is running smoothly. About the queues. There are multiple Sidekiq queues and they vary in importance and usage. The Mastodon documentation actually outlines this very well, so I'm just going to borrow the information from there : The only other super important note is that the scheduler queue can 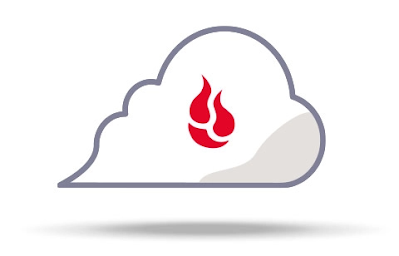 Setting up Backblaze B2 object storage for your Mastodon server.

Hello again, it’s been a while but I wanted to put together a quick and easy guide to setting up Backblaze B2 to use on your Mastodon server. I chose Backblaze B2 because of price, it’s $5 per TB with free outgoing bandwidth if you use Cloudflare. This guide will be strictly for using Backblaze B2   without   Cloudflare, but if you want to use it with it and you’re already using Cloudflare for your DNS then it’s relatively simple to do. Since a lot of people avoid Cloudflare these days, this guide is for those users. For smaller instances, this might be really helpful because the first 10GB of storage is free and the first 1GB of bandwidth is free each day. I was originally using AWS’s S3 for my media, but the costs quickly got more than I was planning on spending so I switched to Backblaze B2 instead and it’s now costing me less than $10/month for all of my media storage including bandwidth. My current usage as of this post is a little over 5 million files using 1.5TB of bandwidth.